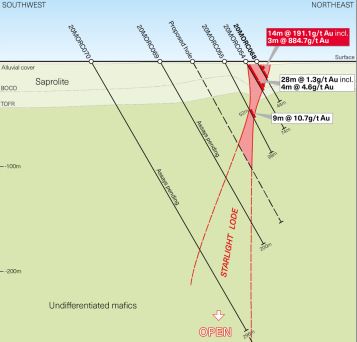 Musgrave Minerals Ltd reported assay results for a further five reverse circulation (“RC”) drill holes and the first five diamond drill holes from the current program at the new Starlight gold discovery at Break of Day. Drilling continues to confirm the high-grade nature of the Starlight and White Light gold discoveries. Starlight remains open down-dip where drilling is continuing. All intercepts reported in the current drilling program are outside the existing Break of Day resource estimate.

The Starlight and White Light gold lodes at Break of Day are located on the Company’s 100% owned ground at its flagship Cue Gold Project in Western Australia’s Murchison district. Drilling at Starlight is continuing, with a focus on infilling and also extending the high-grade gold mineralisation at depth.

Drilling will also continue to test for new lodes within the Break of Day/Lena mineralised corridor with a third drill rig due to commence on the 100% owned Musgrave ground in mid-August.

“Starlight continues to produce stunning gold results in near-surface drilling. Further RC drilling is underway to infill and extend the Starlight mineralisation with the aim of completing a JORC resource update late in Q3 2020. Diamond drilling is also continuing to test for depth extensions of the high-grade Starlight lode below 250 vertical metres and to further define the White Light lode. We anticipate having four drill rigs on site by mid August.”

Diamond drilling at Starlight has returned intercepts including: