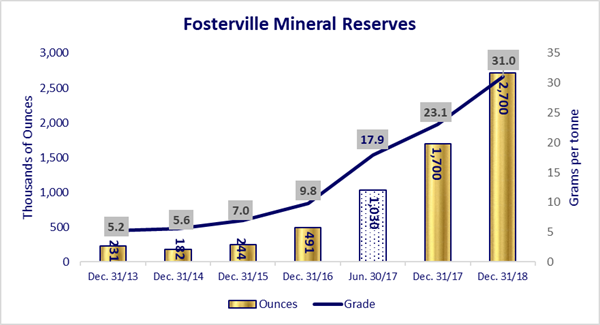 Kirkland Lake Gold Ltd. announced overnight that the Company has revised and increased its consolidated three-year production guidance and improved its unit-cost guidance for 2019. The Company also announced today Mineral Reserve and Mineral Resource estimates for December 31, 2018, which include growth in Mineral Reserve ounces and average grades at both Fosterville and Macassa, as well as on a consolidated basis.

Key Highlights of the Production Guidance and Mineral Reserve Estimates Include:

Tony Makuch, President and Chief Executive Officer of Kirkland Lake Gold, commented: “Since November 2016, Fosterville has been transformed into one of the world’s highest-grade, most profitable gold mines, which has greatly benefited Kirkland Lake Gold and its shareholders. The completion of Fosterville’s December 31, 2018 Mineral Reserve and Mineral Resource estimates, with the related revisions to its life of mine plan and production profile, have taken that transformation to an even higher level, with the potential for much more to come. Largely driven by the 34% increase in the Fosterville Mineral Reserve grade, we are now on track to achieve significantly higher levels of production at Fosterville in 2019 than previously expected and could reach one million ounces of annual gold production as early as this year. Just as encouraging as the growth in ounces, is the fact that with a higher average grade at Fosterville, as well as at Macassa, our Mineral Reserve ounces are more valuable, which means improved unit costs and increased cash flow per ounce going forward based on current gold prices.