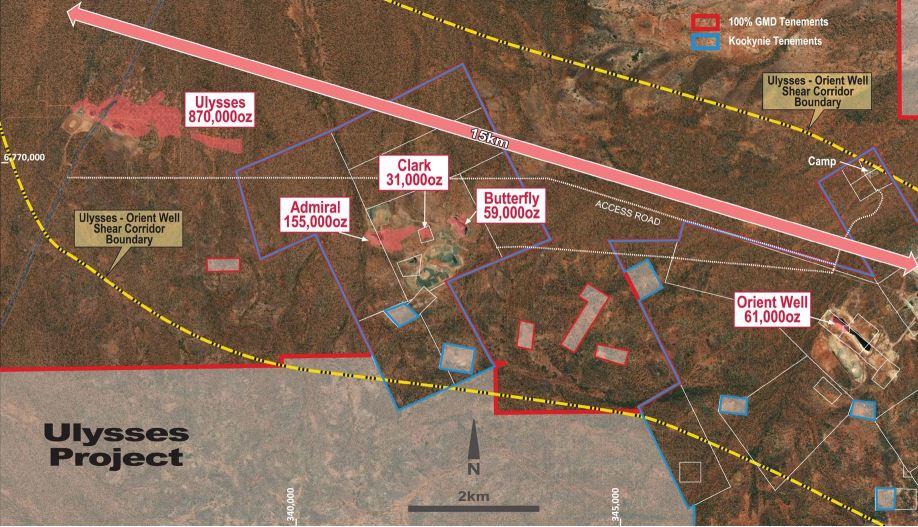 Genesis Minerals Limited announced today that a major new drilling program has commenced at its 100%-owned Ulysses Gold Project in Western Australia, focusing on the recently acquired Kookynie tenement package. The drilling program, which will continue over the remainder of CY2020, will comprise a combination of Resource definition and expansion drilling along the Ulysses to Orient Well corridor.
Results from this program will feed into a Feasibility Study on the development of a significant standalone gold operation at Ulysses, with ore to be sourced from a combination of known underground and open pit Resources. Genesis is targeting completion of this Feasibility Study in the first quarter of CY2021.
Initial drilling will focus on approximately 1.8km of strike containing the Admiral, Clark and Butterfly Resources (Figures 1 and 2), which are estimated to total 4.6Mt @ 1.7g/t gold for 246,000 ounces. Drilling will include Resource confirmation and strike and dip extensional drilling in both structural orientations. Exploration drilling targeting repeat structures will also be completed following pit mapping, further structural interpretation and 3D modelling.
Genesis Managing Director, Michael Fowler, said: “This is a hugely exciting program for Genesis, providing our first opportunity to test the highly prospective mineralised corridor that lies between our flagship Ulysses deposit and the Orient Well deposit, which lies roughly 15km to the south-east.
This corridor has been shown to be highly mineralised, with current Resources of 1.28 million ounces over five deposits and some exceptional targets for growth. We believe there is very strong opportunity to significantly expand our current Resource base to underpin a long-life, standalone mining operation at Ulysses.
Drilling is currently underway with one RC rig already up on site, and a diamond rig and second RC rig expected to arrive in the next month.
We will also be undertaking air-core drilling on a campaign basis over the rest of the year. This should deliver a steady stream of news-flow for Genesis over the coming months, ahead of the planned delivery of an updated Mineral Resource and Feasibility Study for the standalone Ulysses Project in the first quarter of CY2021."