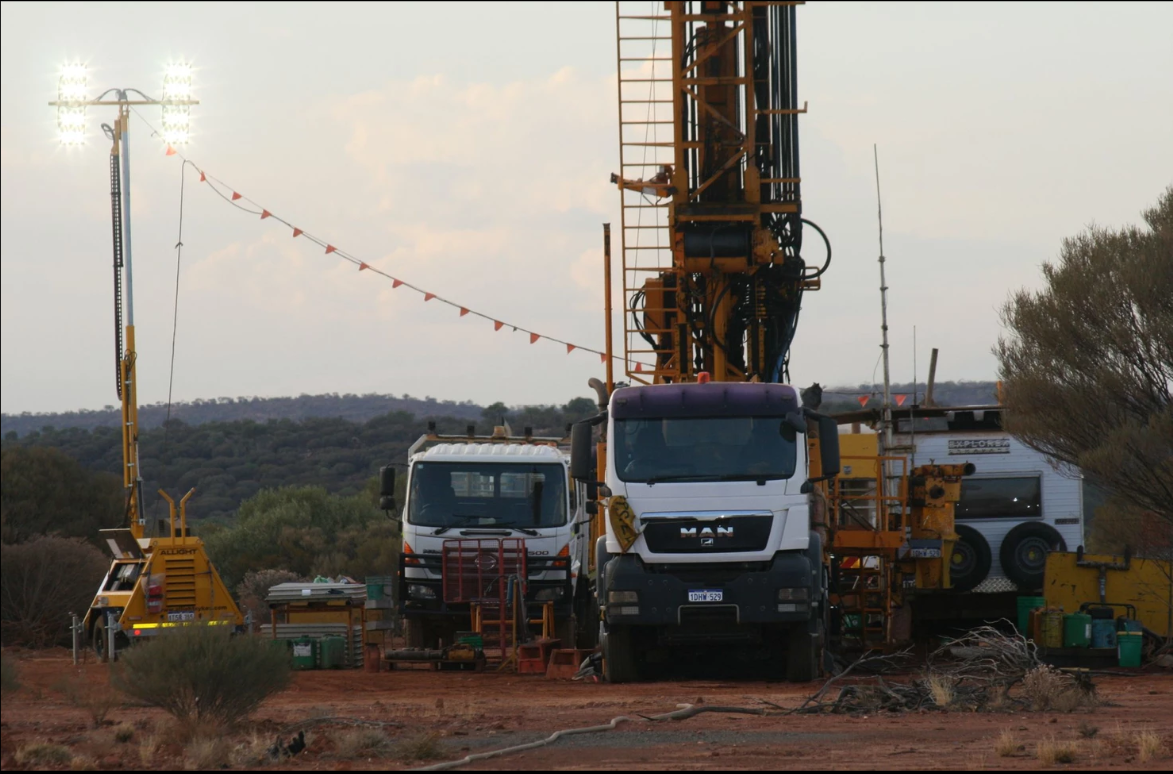 International lead and zinc smelting company, Toho Zinc will invest $90M for a 40% ownership interest in Galena’s currently wholly-owned subsidiary AMPL, which owns Abra Base Metals Project in Western Australia. Toho and Galena each have a right to off-take their percentage share of Abra production on arms-length, benchmark terms, and then on-sell to third-parties.
Managing Director, Alex Molyneux commented, “This is a great transaction that provides the equity required to develop Abra, recognising the strategic value of the Project. Furthermore, Toho is a key player in the global lead and zinc industry and an experienced miner, so we look forward to the benefits of a true partnership in the development of Abra.” 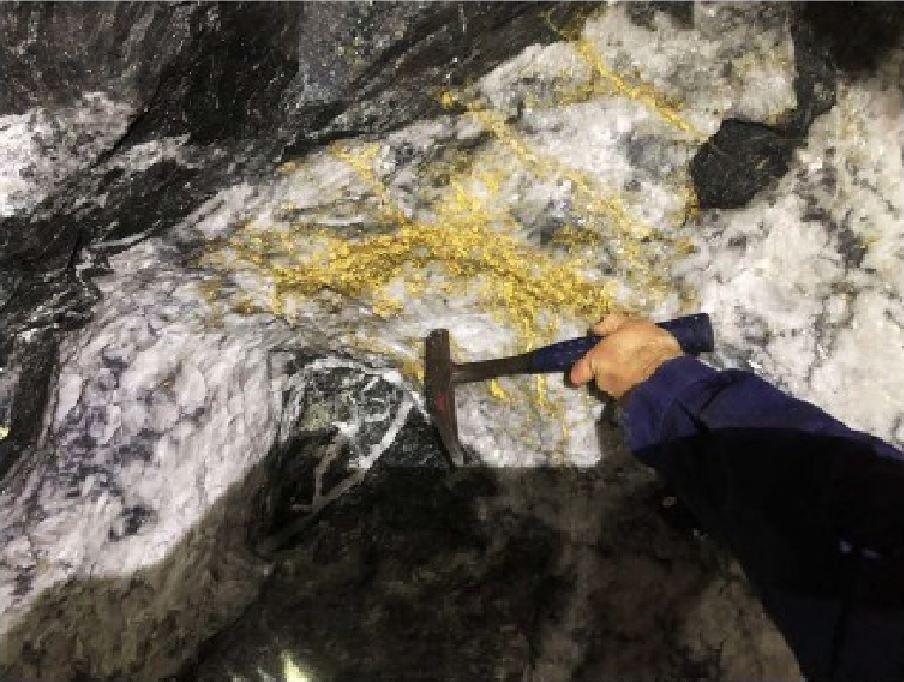 RNC Minerals announced a new high-grade gold discovery at its Beta Hunt Mine.
Over the past week, approximately 9,250 ounces of high-grade gold was produced from a 44 m3 cut (130 tonnes) on 15 level at the Beta Hunt Mine (equal to over 70 ounces/tonne or 2,200 grams/tonne).
The high-grade gold (coarse gold and large gold-containing specimen stones) includes approximately 190 kg of specimen stone, the largest of which is 95 kg with an estimated gold content of 2,440 ounces and a second large specimen stone of 63kg with an estimated gold content of 1,620 ounces.
Final ounces will be determined once the coarse gold is processed and/or sold over the next week which is expected to yield approximately $16 million in cash. All of the high-grade coarse gold is hand-picked, direct ship ore and immediately sent directly to the Perth Mint. 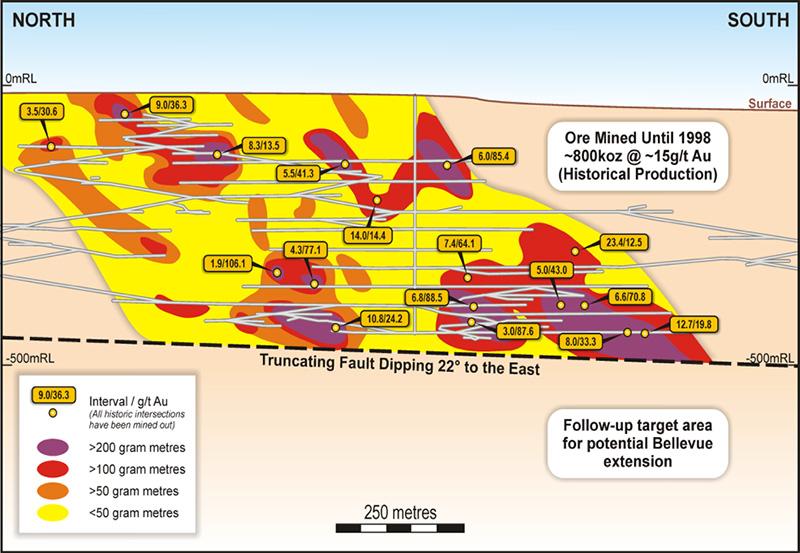 Bellevue today announced their latest drill results which confirms the significance of the new >800 metre strike length discovery in the Tribune Footwall directly below the Bellevue underground workings - The Viago Lode.

3.4 m @ 10.4 g/t gold & 0.3m @ 44.4g/t gold step-out drill hole 150 metres to the north in hole DRDD059 (refer ASX 17/07/2018)
11.4 m @ 9.6 g/t gold step-out drill hole 150 metres to the south in DRDD060 (refer ASX 17/07/2018)1
The latest drill result is considered highly significant by the company given the exceptional tenor of mineralisation and the wide spacings of the current drill grid (~240 metres). The result is very reminiscent of the high-grade bonanza ore shoots at the historical Bellevue mine in geology, grades and width.
Executive Director Mr Steve Parsons said, “We are very pleased with how this new discovery continues to firm up, with the latest drill result confirming the Viago Lode to be another significant discovery for the Company. To have intercepted visible gold mineralisation in all but a single hole with scout drilling over 800 metres of strike length is quite exceptional and now with the receipt of this latest bonanza grade intersection, the potential of the Viago Lode is starting to become clear.
To have a second, high-grade gold discovery in such a short period of time points to the quality of the Bellevue Lode system. We are very excited to add another drill rig and anticipate we will upgrade the recent maiden resource estimate in Q4 of this year.” 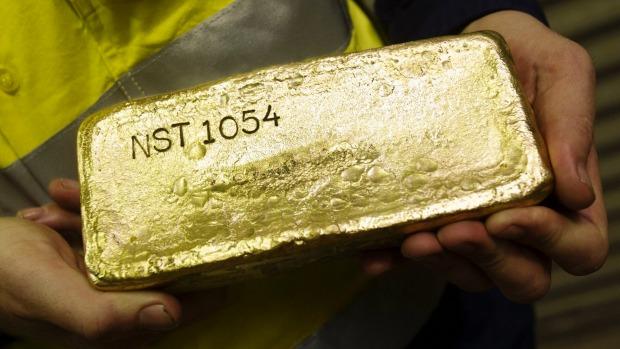 Northern Star Resources announced today that the Company yesterday hit its production rate target of 600,000ozpa. Production for the June quarter to date is 150,000oz. This takes the total for the financial year to date to 540,000oz, meaning Northern Star is on track to beat the top end of its FY2018 guidance of 540,000-560,000oz. All-in sustaining costs will be within the guidance range of A$1000-1050/oz. Northern Star Executive Chairman Bill Beament said the Company was poised to maintain the growth trend on the back of its highly successful exploration strategy and increased processing capacity.
“The recent acquisition of the 1.2Mtpa South Kalgoorlie mill, combined with our ongoing exploration success, will underpin continued production growth in our Kalgoorlie operations,” Mr Beament said. “This additional milling capacity provides increased flexibility in Kalgoorlie, where we have also just declared commercial production at the Millennium mine. “At Jundee, we are experiencing a similar scenario, with the processing plant now running at the rate of 2Mtpa on fresh underground ore.” Northern Star will provide production and cost guidance for FY2019 as part of its wider Strategic Update in early August.

$4 Billion Dollar Mine Approved in WA 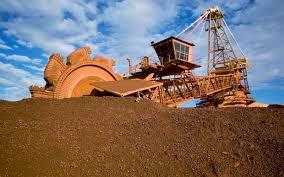 The BHP last night approved US$2.9 billion ($4 BILLION AUD) in capital expenditure for the South Flank project in the central Pilbara, Western Australia.
BHP President Operations, Minerals Australia, Mike Henry, said the South Flank project will fully replace production from the 80 Mtpa (100 per cent basis) Yandi mine which is reaching the end of its economic life.
“South Flank is a capital efficient project which offers attractive returns, and which was approved following a thorough evaluation under BHP’s Capital Allocation Framework,” Mr Henry said. “The project will create around 2,500 construction jobs, more than 600 ongoing operational roles and generate many opportunities for Western Australian suppliers. It will enhance the average quality of BHP’s Western Australia Iron Ore (WAIO) production and will allow us to benefit from price premiums for higher-quality lump and fines products.”
The South Flank project expands the existing infrastructure at Mining Area C, and involves construction of an 80 Mtpa crushing and screening plant, an overland conveyor system, stockyard and train loading facilities, procurement of new mining fleet and substantial mine development and pre-strip work.
First ore from South Flank is targeted in the 2021 calendar year, with the project expected to produce ore for more than 25 years.
South Flank iron ore will contribute to an increase in WAIO’s average iron grade from 61 per cent to 62 per cent, and the overall proportion of lump from 25 per cent to approximately 35 per cent. It is expected to have a strip ratio in line with the WAIO average.
In June 2017, BHP approved an initial funding commitment of US$184 million (BHP share), primarily for the expansion of accommodation facilities to support current and future workforce requirements. 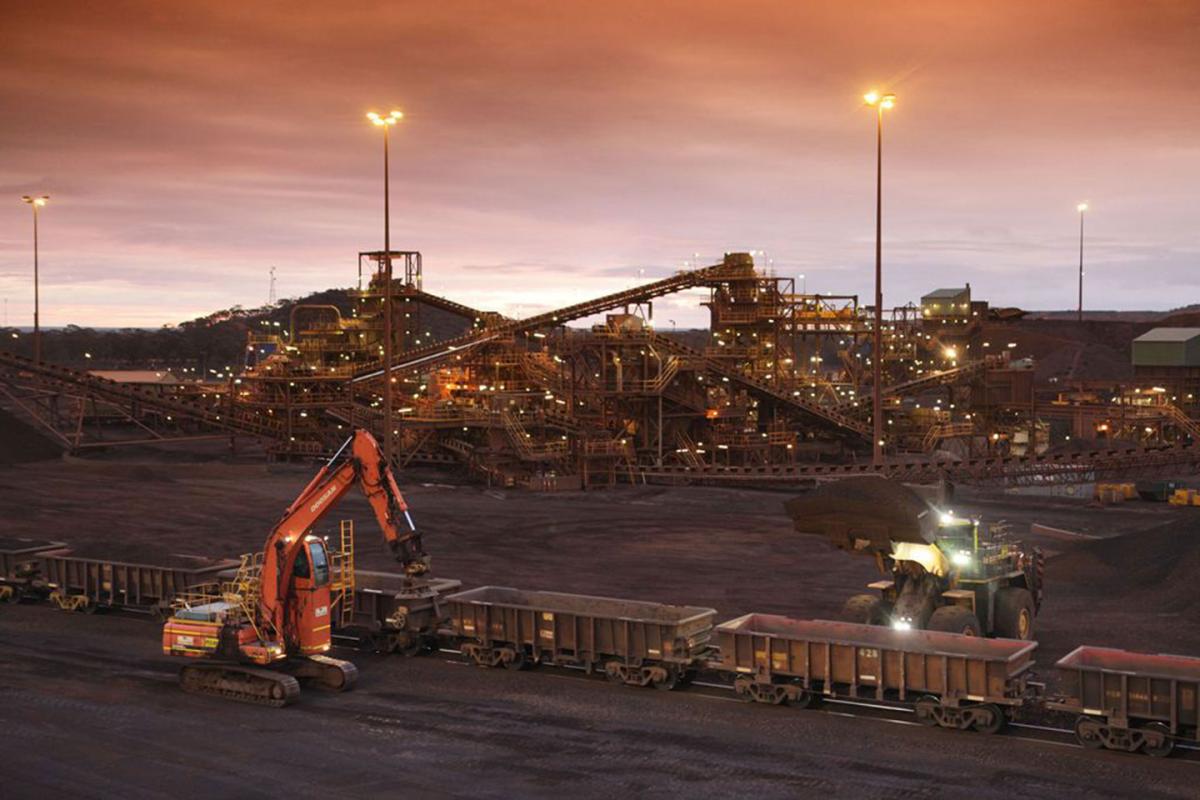 Mineral Resources Limited announced that it has entered into a definitive agreement with Cleveland-Cliffs Inc. to acquire the assets that were used, to run its Koolyanobbing iron ore operation in the Yilgarn region of Western Australia. The assets that MRL will acquire include Cliffs’ tenements and all remaining iron ore as well as the fixed plant, equipment and non-process infrastructure items on those tenements. In addition, MRL will assume ownership of Cliffs’ fixed infrastructure assets at the Port of Esperance, which include the railcar dumper and two large storage sheds. Koolyanobbing is located approximately 50km north of Southern Cross and immediately adjacent to MRL’s existing Carina Iron Ore Project.
The acquisition of the remaining iron ore in the Cliffs deposits will enable MRL to realise further value from the investments it previously made in fixed plant, mobile equipment and rail rolling stock, which the Company has used to operate Carina since 2011. This transaction will also see MRL commence an iron ore export business from Esperance using larger and more cost-effective cape-size vessels.
Mineral Resources Managing Director Chris Ellison said:" I would like to thank Cliffs, their local management team and their advisers KordaMentha and Norton Rose Fulbright for working tirelessly with the MRL team over recent weeks to successfully conclude this transaction. I particularly wish to acknowledge the efforts of the State Government, the Premier Mark McGowan and his Ministers whose commitment to preserving jobs in Western Australia and getting better results for the Yilgarn has been plainly evident in our dealings with them. I also wish to thank the team at Arc Infrastructure for their pro-active approach in agreeing an acceptable below-rail access arrangement that recognises the challenging conditions in the lower-grade iron ore market. Our combined efforts have culminated in a transaction that delivers a win-win outcome for all parties involved:

Cliffs achieves a clean exit from Australia on economic terms that are more favourable than if they were to have simply shut down the Koolyanobbing operation;
The remaining iron ore left on the Cliffs tenements will be extracted and sold to create ongoing economic activity and benefit for Western Australia; and
MRL will continue sending tonnes down the rail to Esperance and by doing so continue to provide jobs for hundreds of West Australians for the next five to six years.

“I can confidently say that this transaction, and the many benefits it will create for Western Australia, would simply not have been possible without the cooperation and commitment from Cliffs, the State Government and Arc Infrastructure.” 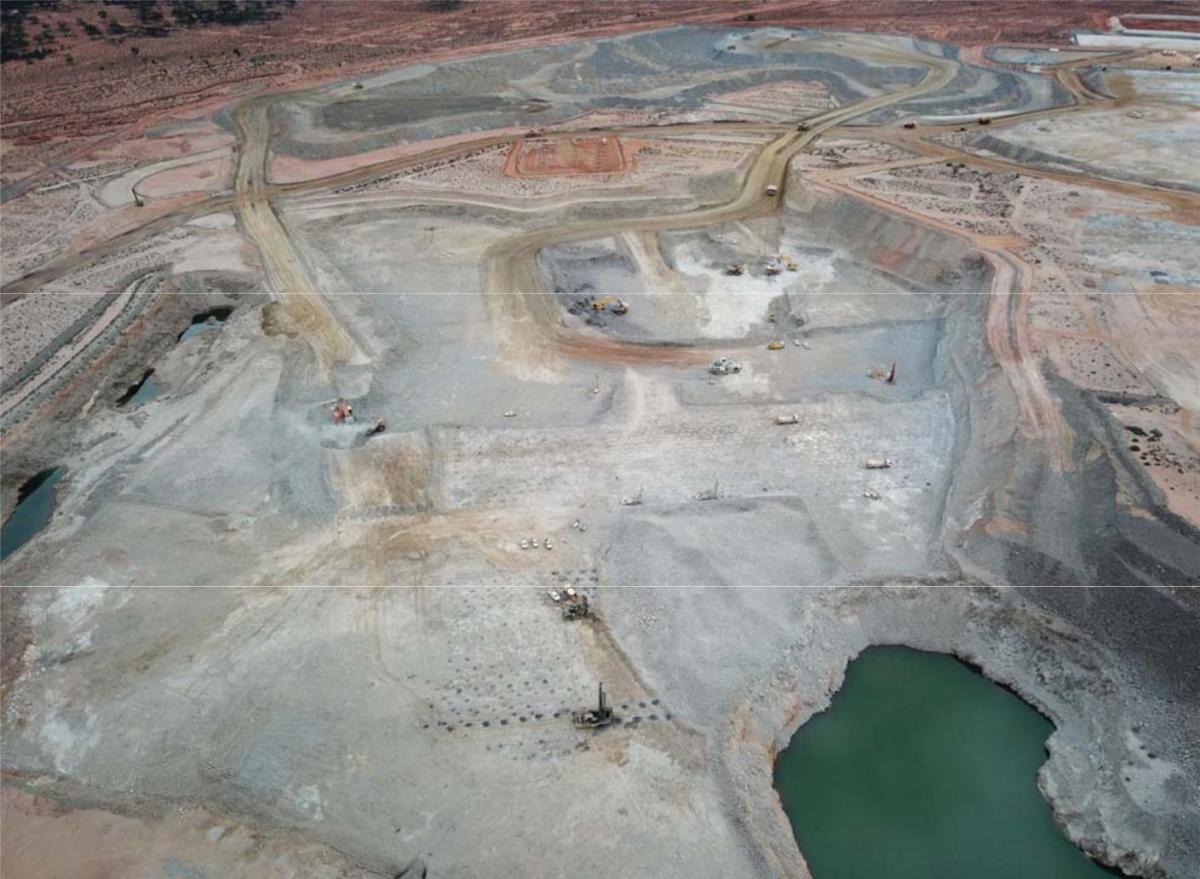 Joint venture partners Tawana Resources and Alliance Mineral Assets announced today a 105% Reserve upgrade for the Bald Hill Lithium‐Tantalum Mine located in the eastern goldfields of Western Australia The Reserve upgrade reflects pit design changes resulting from increases to Indicated Resources following infill drilling completed in the second half of 2017. The Total lithium Resources of 26.5Mt at 1.0% Li2O now supports 9 years of production. The JV partners are currently reviewing options for significant expansion in processing capacity and concentrate production.
Tawana Managing Director Mark Calderwood said: “The increased Reserves along with the potential for additional Reserves resulting from infill drilling of Inferred material, provide strong support for significantly increasing processing throughput rates. We are actively reviewing the options to best increase throughput in the existing plant and/or add an additional DMS circuit and fines circuit. There has been strong interest from a number of parties to obtain concentrate supply from Bald Hill.”

Paddy's Sparkle in the West

Westgold Resources Limited announced today an update of its underground exploration into virgin areas of Paddy’s Flat ore system at its Meekatharra Gold Operations.
Their first underground drilling into the virgin zones beneath the Fenian’s–Consol’s spurs have returned spectacular results providing high-hopes for a continuation of these prolific high-grade lodes at depth, and importantly an impending boost to the overall ounce per vertical metre of the ore system. Best results include:

DALGARANGA GOLD PROJECT AHEAD OF SCHEDULE 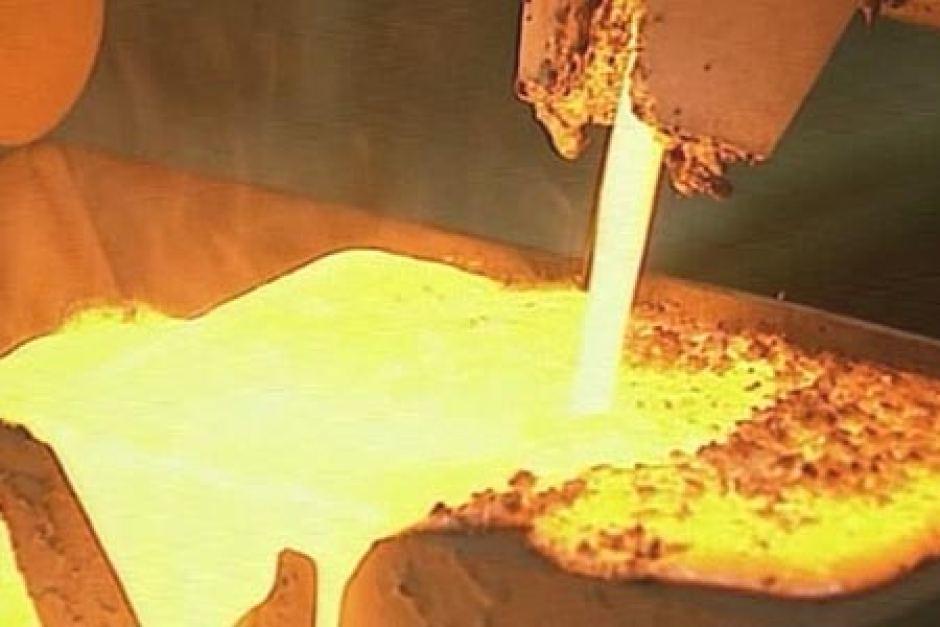 Gascoyne Resources Limited advised today that it has poured it's first gold bar from the new 2.5Mtpa processing plant at the Company’s 100% owned Dalgaranga Gold Project.
Dalgaranga contains a Measured, Indicated and Inferred Resource of 31.1Mt @ 1.3 g/t for 1,320,000 ounces of contained gold, which is inclusive of Proved and Probable Ore Reserves of 15.3Mt @ 1.3 g/t for 612,000 ounces of gold. The Company remains focused not only on ramping up to full production, but also an ongoing aggressive exploration effort aimed at increasing the mine life towards 8-10 years, as well as progressing the Glenburgh Gold Project, the Company’s second +1.0 million ounce gold project in Western Australia.
Mike Dunbar the Company’s Managing Director said:
“To say that I am pleased to have poured our first gold would be a massive understatement. The Company has managed to put together a fantastic team which has grown the global resource base from under 200,000oz on listing, to now having two gold projects which each contain more than 1 million ounces, and progressed Dalgaranga through feasibility. We have built a 100% owned new gold processing facility and associated infrastructure under budget and ahead of schedule, and now poured first gold.
The construction of the Dalgaranga mine would not have been possible without the Company’s Director of Operations and Development, Mr Ian Kerr who with his highly experienced (but small) development team of Warren King and Garry Moore, along with GR Engineering’s Team of Andrew Bennett and Matt Gordon have delivered the project ahead of schedule and under budget. A very rare feat indeed.
With the plant now operational, the aim for the next few months is to achieve consistent performance from all aspects of the process plant.
While the recent attention has been on delivery of the Dalgaranga Gold Project, the Company remains focused on continuing the exploration success that has so far resulted in discovery of over 2 million ounces of gold since listing. The current 75,000 metre drill programme is split between Dalgaranga, to extend the mine life to 8 – 10 years, and Glenburgh, where exploration outside the known 1.0 million ounce resource base is aiming to increase the global resource prior to feasibility and ultimately development.” 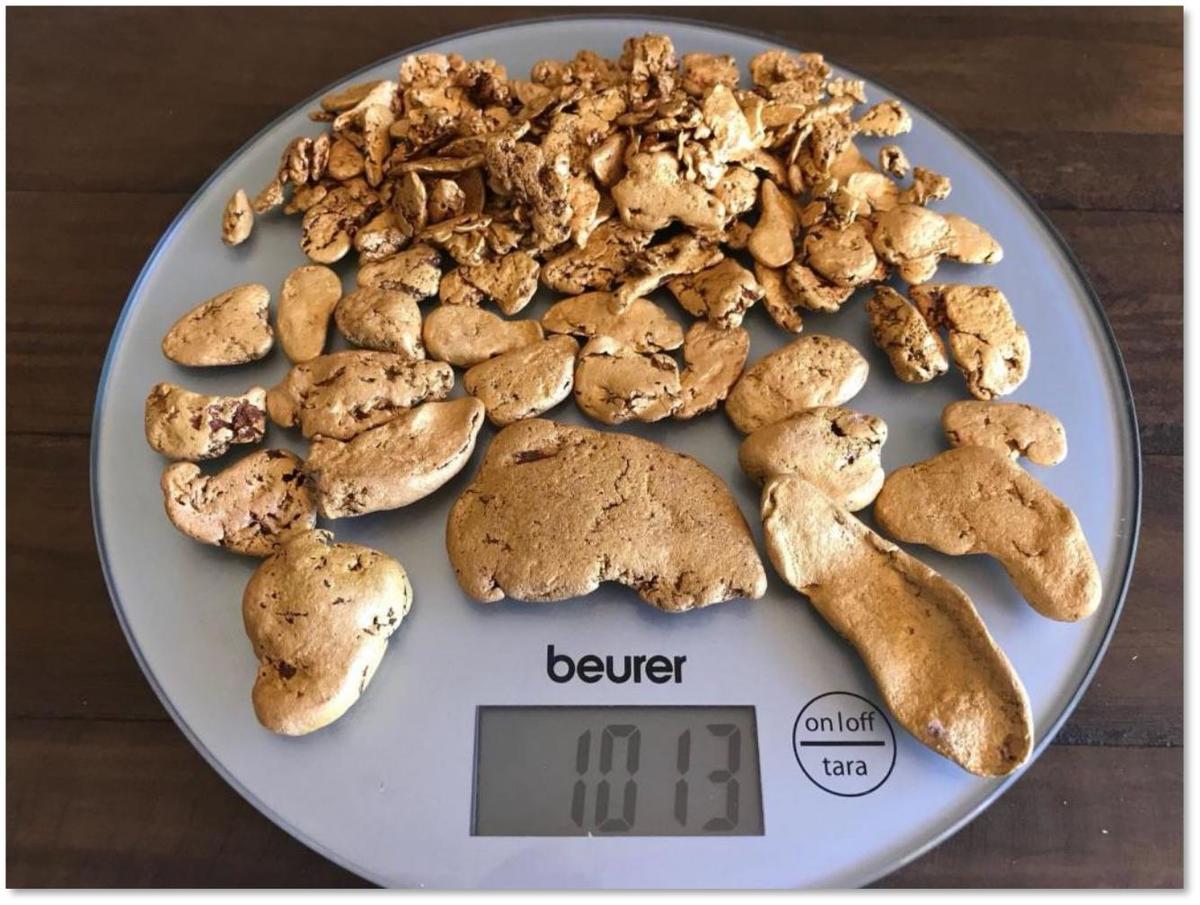