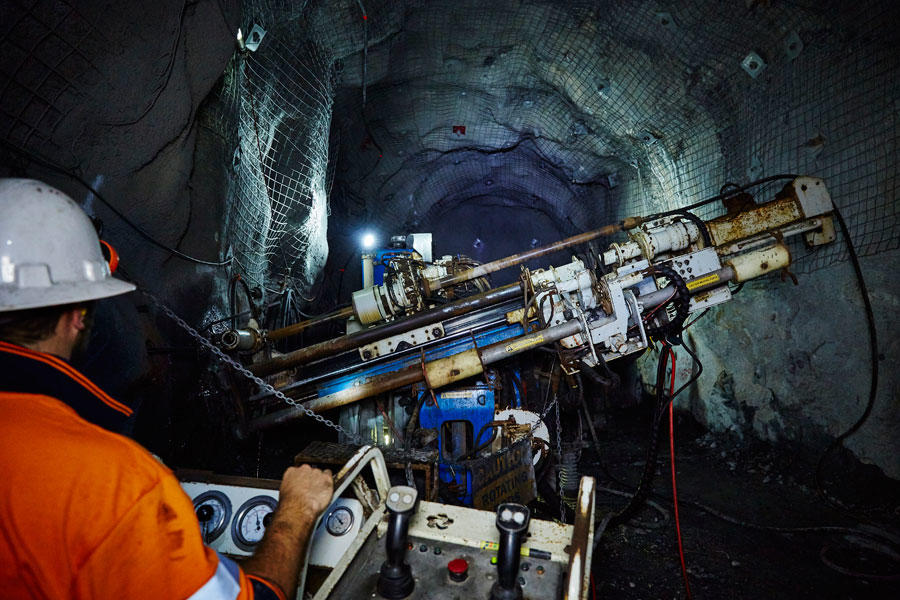 Canadian listed Newmarket Gold is the owner of 3 underground operating mines in Australia. The flagship operation, Fosterville Gold Mine, and the Stawell Gold Mine are located in the state of Victoria, and the Cosmo Gold Mine is located in the Northern Territory. Newmarket Gold produced 55,794 ounces during the third quarter and  and has achieved record production of 175,041 ounces for the first nine months of 2016. Fosterville achieved third quarter production of 36,967 ounces, only 1% off the record performance achieved in Q2 2016, accounting for 66% of consolidated production. Cosmo achieved a record recovery rate of 95.3%, up from its record of 94.2% in the previous quarter, contributing 10,677 ounces of production during Q3 2016, with Stawell contributing 8,150 ounces.
Douglas Forster, President & CEO, Newmarket Gold said “Based on record consolidated production in the first nine months of 2016, Newmarket Gold is on track to meet the Company’s improved guidance of 225,000 - 235,000 ounces of gold as announced in Q2 2016. The business combination with Kirkland Lake Gold is expected to close during Q4, more than doubling 2016 pro-forma gold production to over 500,000 ounces from a new operating platform of 7 underground mines in Tier 1 mining jurisdictions. In addition, the combined company will generate superior free cash flow and have strong financial and technical capabilities to exploit its pipeline of exploration and development opportunities to fuel future organic growth. We believe the combined entity will be a preferred investment among mid-tier gold producers, commanding an increased capital market profile and enhanced shareholder value.”
“Newmarket Gold achieved record production of 175,041 ounces of gold for the first nine months of 2016, led by high grade, low cost ounces from our flagship Fosterville Mine which produced 107,350 ounces of gold with YTD AISC per ounce sold of $743. Productivity improvements at Fosterville were achieved through increased mine production utilizing new higher capacity haul trucks and the opening of new production levels in the Lower Phoenix area, as well as increased mill throughput rates, all of which contributed to favorable third quarter operating cash costs per ounce of $471 and an AISC per ounce sold of $765. Newmarket’s liquidity position continues to improve, supporting our overriding objective to grow free cash flow which totaled $11.9 million in Q3 2016 and $38.2 million YTD. Since the start of 2016, we have generated cash flow from operations of $74.7 million and ended the third quarter with $82.5 million in cash, a 126% increase from the start of the year.” 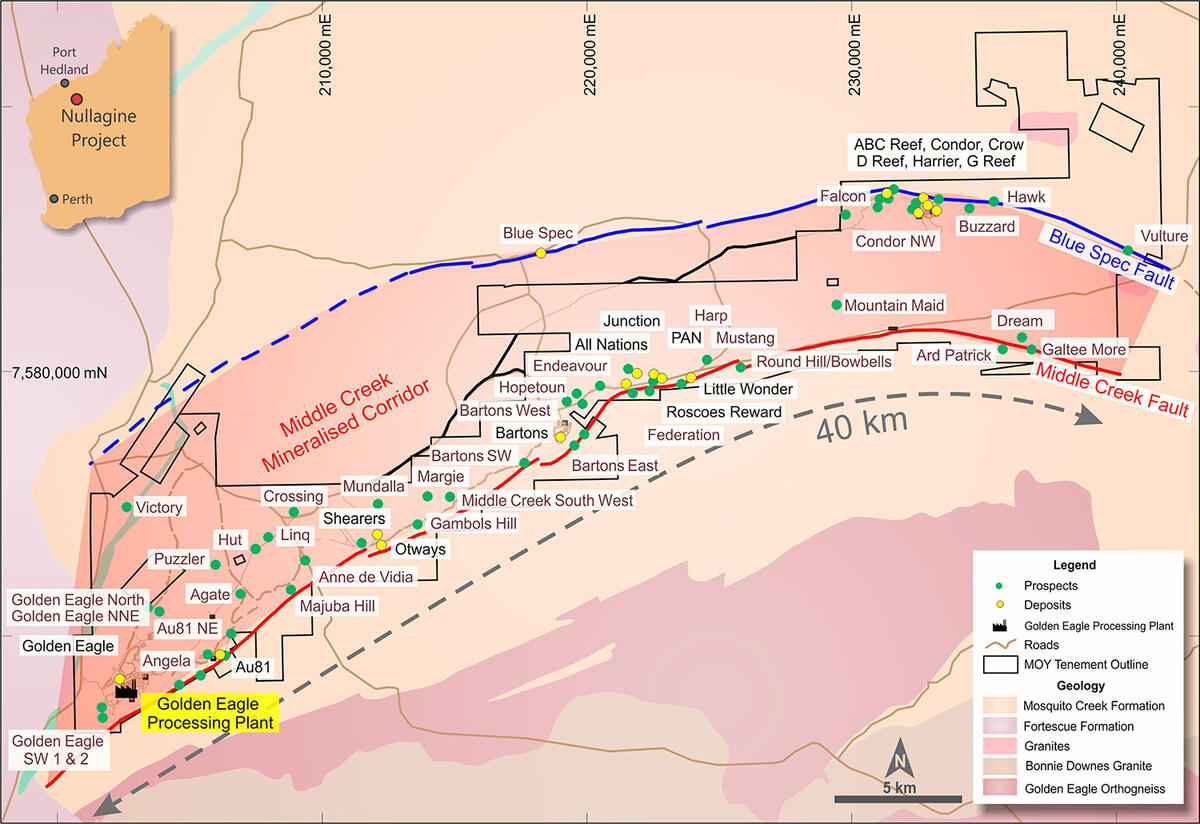 Millennium Mineral today anounces that it has discovered a new 2.25 km-long zone of mineralisation at its Nullagine Gold Project in WA’s Pilbara. Drilling results highlight the strong potential to establish open pit operations along this trend, which stretches from the All Nations North deposit in the north-east to the Hopetoun deposit to the south-west.
Millennium has had three RC drilling rigs as well as a diamond rig (where required) operating at the Project for most of 2016 to assist with delineation of new Mineral Resources. Given the success of the exploration program and its positive impact on Nullagine’s mine life. Millennium has increased the 2016 exploration budget to $13.9 million with a similar expenditure expected next year.
Millennium Chief Executive Glenn Dovaston said the discovery of significant mineralisation along the Hopetoun – Endeavour trend provided further evidence that the Company’s strategy to grow. Nullagine’s mine life was working.“This discovery is incredibly exciting,” Mr Dovaston said. “The results are strong and demonstrate the presence of mineralisation along this 2.25 km stretch. “Once we get the final assays from this program, we will devise a strategy to establish the full extent of the mineralisation and its potential to be part of the inventory and mine plan at Nullagine.”

The opening of a $640 million copper mine near Cloncurry is another sign Queensland has weathered the storm of a worldwide resources price slump. Minister Assisting the Premier on North Queensland Coralee O’Rourke said at the official opening of CuDeco’s Rocklands Copper Mine was good news for the economy and for the region.
“Today we mark the opening of a $640 million world-class facility and its first shipment of Queensland copper, which will support up to 120 jobs,” Mrs O’Rourke said. “Queensland’s North West Mineral Province is known around the world as a highly prospective region and the opening of Rocklands Copper mine demonstrates the area continues to have a great future ahead. “During 2014-15, mineral production in Queensland was valued at $8.6 billion – and more than 70 per cent of that amount was sourced from Queensland’s North West Mineral Province.
“While Queensland’s mining sector has faced a challenging period in recent years, there continues to be green shoots across the state – highlighted by today’s official opening and the first shipment of exported copper.” Mrs O’Rourke said the Palaszczuk Government was considering recent recommendations by the North West Minerals Province Taskforce to help boost future exploration and production in the region. “We need to think differently and innovatively to unlock the next generation of mines and the work coming out through the Taskforce is certainly looking at how to make this happen,” she said.
“The opportunities for regional Queenslanders are evident – with Rocklands mine supporting jobs and putting accommodation in place to ensure the local community shares the flow-on economic benefits.” Mrs O’Rourke said the Government was committed to laying the foundations for sustainable economic development and growth in the Queensland resource sector, to enable more projects to come to life. “I am focused on driving economic development in this part of the State and creating jobs, which includes helping to grow this important sector,” Mrs O’Rourke said. “Through our Government’s Advancing North Queensland plan, I am working with my cabinet colleagues to find solutions in priority areas such as water, roads, trade and investment, which are vital to support the mining sector.”

Edikan production on the rise 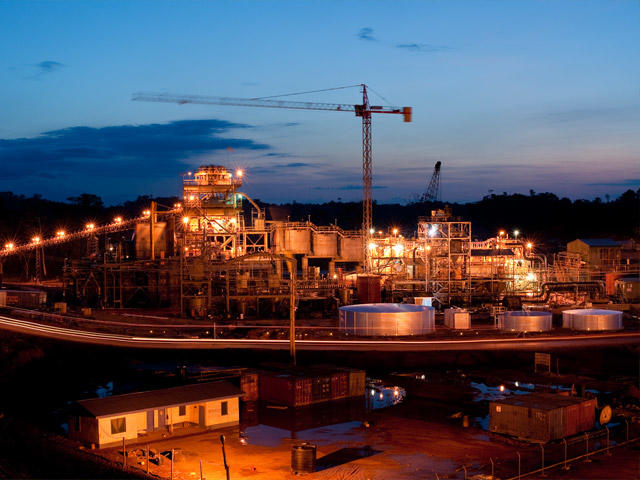 Perth Gold miner Perseus Mining today reported an increase in gold production during its last quarter at its Edikan gold mine, in Ghana, on the back of improved mill performance. Gold production for the quarter was up 9% on the June quarter to 43 776 oz, with Perseus telling shareholders on Monday that the company was on track to achieve its full-year production guidance of between 80 000 oz to 100 000 oz of gold. Gold sales from the Edikan mine reached 43 952 oz during the quarter, up from the 39 642 oz sold during the previous quarter, with average sales prices also up from $1 172/oz to $1 223/oz. Meanwhile, Perseus noted that production of costs reduced by 6% during the September quarter, to $1 095/oz, while all-in sustaining cost was also down by 10%, to $1 388/oz.

Today South32, the world's biggest producer of manganese, said it more than doubled its cash on hand in the September quarter due to a cost cutting drive and as commodities prices recovered.
"Stronger commodity prices and cost saving initiatives delivered a further $US239 million increase in our net cash position to $US551 million, despite the impact of annual payments that followed year end and the typical lag in commodity pricing," chief executive Graham Kerr said.

Today Evolution Mining Limited advised that it has entered into a binding agreement with Newcrest Mining to acquire the Marsden copper-gold project.
Marsden is a copper-gold porphyry deposit located immediately to the south-east of Evolution’s Cowal gold mine in New South Wales, and is the nearest known sizeable mineral deposit to the Cowal operation outside the Cowal tenement package; as such, it has strategic value to Evolution’s exploration activities in the region. Technical review by Evolution has shown that the potential to develop the Marsden deposit is enhanced by utilising the Cowal milling circuit and associated infrastructure.
Jake Klein, Executive Chairman of Evolution said “The Marsden project provides long term optionality to our nearby Cowal operation and has the potential to further extend the life of what is already a long-life operation.” 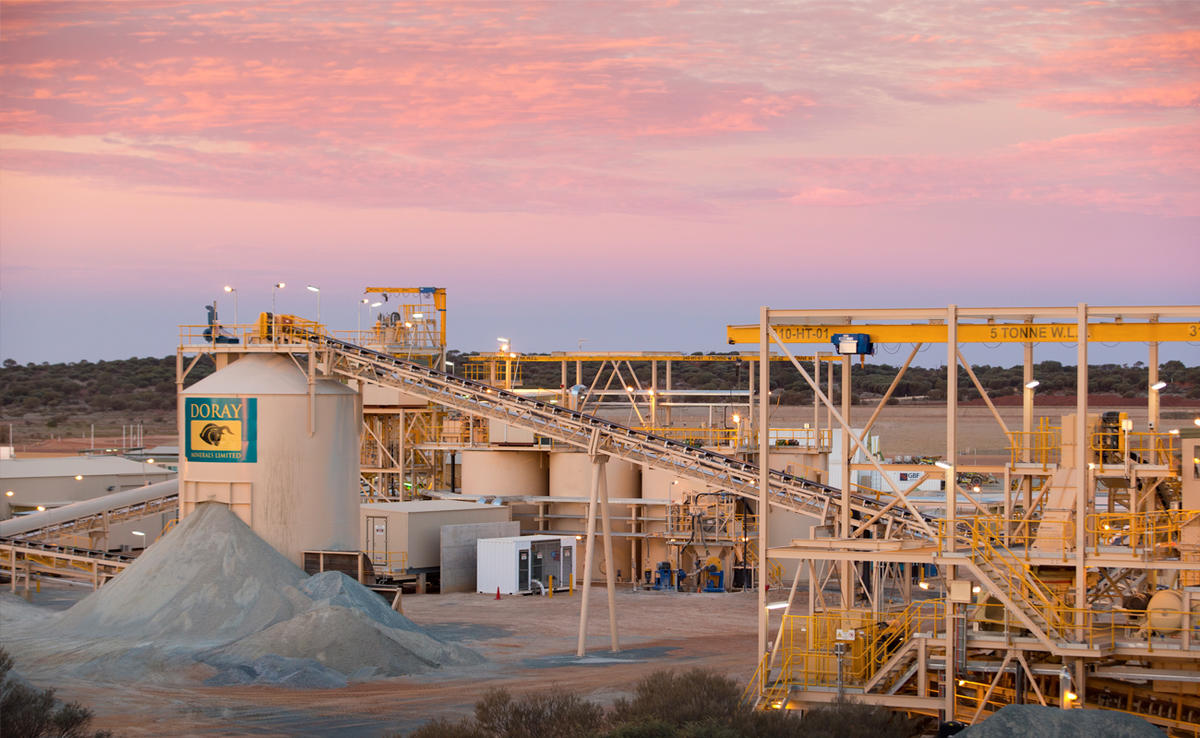 Doray Minerals Ltd announced today strong earnings and record cash flow for the 2016 financial year, whilst funding and building the Company’s second high‐grade gold mine at Deflector.
Full year ending 30 June 2016 showed revenue of A$131.1 million and net profit before tax of A$17.5 million including a one off A$5.8 million exploration write-down. Doray’s Managing Director, Mr Allan Kelly, said Andy Well had delivered within production and cost guidance for the third consecutive year and the Company looked forward to reaping the benefits of having a second high‐grade gold operation for the first time with the ongoing ramp‐up of production from Deflector.
“Over the last 12 months, we achieved EBITDA of $62.7 million from revenue of $131.1 million, resulting in an outstanding EBITDA margin of 47.8%, amongst the highest of any ASX gold producer,” Mr Kelly said. “Our cash and debt position was also better than expected at the end of the financial year, as a combined result of higher gold prices being received for production at Andy Well and the new Deflector Project coming on line on schedule and within budget.”

Blackham Resources Ltd announced today the latest results received from underground drilling at the Bulletin mine with drilling from the Bulletin Decline continuing to produce excellent results between the historical stopes including:

The diamond drill program was designed to infill the lode identified in Blackham’s previous round of drilling between two historical stoping areas. This current program will allow resources to be upgraded from unclassified or Inferred to Indicated.
Blackham’s Managing Director, Bryan Dixon, said “The latest Bulletin drilling has demonstrated the potential to continue growing the Wiluna resources close to surface. An updated Bulletin resource is likely to complement the work we are doing on the Wiluna open pits with both feed sources to be integrated into the Wiluna expansion study currently underway."

Millennnium's latest drilling at Little Wonder outlines high grade gold intersections over a 850m strike. Drilling results obtained grades up to 19 gpt which helps to fullfil Millennium’s strategy to grow mine life at its Nullagine project. The Little Wonder deposit is located approximately 25 km north east of the Project’s processing plant and forms part of the Millennium’s Camel Creek mining centre.
"These results are outstanding and again demonstrate that our strategy to grow the mineral inventory and mine life at Nullagine is delivering substantial results,” Millennium Chief Executive Glenn Dovaston said, “when combined with the strong results announced recently from the initial deep drilling campaign, it is clear that there is the potential to significantly extend the existing mine life.”

Over the past few years, Metals X has made a number of shrewd acquisitions and has built a formidable, diversified mining company. It has three operating gold projects, four process plants with 5.5mtpa combined capacity and has built a gold resource base of 15.4 million ounces and ore reserves of 2.89 million ounces. It currently produces at a run-rate of 220,000 ounces per annum and has a clear plan to double this over the next few years.
The Company now believes its base metals division can stand alone as a base metals company, with production from its tin and copper assets and expansion and growth assets in tin, copper and nickel. Given prevailing economic and market conditions, the Board of Metals X believes the time is now right, and its shareholders are better served, if the Company looks to separate its gold division from the remainder of the diversified base metal assets. The Company has completed an institutional placement to raise $100.6 million and is now undertaking a share purchase plan to raise up to $15 million.